Interviewing to See Beyond One’s Own Itch, Saying No to Overwhelming Demand, and Other Pre-MVP Deliberations with Teemyco’s Co-founder, Charlotte Ekelund

I think the common trait of ‘scratching your own itch’ as a successful starting point for entrepreneurs is muddied with survivorship bias and the inability to measure what could have been. I think that if more entrepreneurs spent more time in pure research and discovery mode, before picking a product/service to provide, we’d see a lot more value being created!

In the following exchange, Teemyco’s co-founder and CEO, Charlotte Ekelund (@TeemycoCharlotte), evokes a similar cool-headed, investigative rigor as she outlines their first few weeks of starting up.

Despite having felt “miserable” on account of the problem she set out to solve, Charlotte made a point to constantly challenge her own biases and assumptions, continuing a focused inquiry into the hypothesis, even when all of a sudden, the entire world became their target audience.

— Segmenting interviews for contexts, annoyances, and perspectives
— Understanding user problems from an “untechnical” (read: deep) standpoint
— How non-fit instances informed their stance on who they were actually building for
— Staying focussed when everyone seemed to want their product

Validating the need for a virtual office in hybrid or remote teams prior to writing the first line of code (and prior to the pandemic!) was of course very helpful in saving us time.

As part of the Antler startup program, we knew we had four weeks until we had to pitch our business idea to the investment committee. Now, we needed to prove that there was a problem and that we could validate the solution.

We started by doing broad interviews.

My network from my previous career, amongst others my recruitment days, made it easier to lift the phone and say ‘Can I please have 30/45 minutes of your time as I’m trying to learn about this particular challenge?’

Within 2 weeks we had spoken with 35 people, hustled together over 30 hours of interview material on all kinds of pain points within remote work.

Since I had worked as a recruiter, I was used to driving interviews in efficient ways in a short amount of time. And it was important to us, to be able to classify what we were learning from different contexts and perspectives.

At first, we categorized the content of what the interviewees had said by their annoyance drivers:

We also structured different buckets depending on the nature of those we had interviewed:

By the end of this exercise we had a broad set of problems and then we started looking at the common denominators and zoomed in for nuance.

Distilling the essences of users’ intentions and hunches

I had felt miserable when working in a small local office, being part of a team that was together in another country. I had never felt more left out. It felt like no one cared to try to get to know or understand me, and I was out of sight.

I wasn’t assisted when I struggled. Cultural barriers and a first time remote manager didn’t help either. I felt very far away from my co-workers, and it took its severe toll on my motivation, performance, and self-confidence.

Years later, having led and driven strategy into action traveling across different offices within FMCG, I moved into recruitment and headhunting.

I spent hundreds of hours listening to what makes people tick at work. I.e., why someone would want, or not want, to leave their current workplace. With this knowledge, I joined the Antler program.

At Antler, I met my co-founder, Oleg, who highlighted the trend and importance for companies to recruit tech talent from anywhere. Combining this with the remote leadership pains reported by an international scale-up CEO friend of mine; it was clear Slack & Zoom were not good enough.

Looking back, I think we got a critical thing right: And that was believing in potential users and the market more than ourselves.

We had a genuine cause rooted in driving inclusion and psychological safety to help teams become high performing.

We did not approach it from a very technical perspective. My primary experience is working with people in mind. I wanted to know: ‘How can we create a product that makes people feel like they are included from anywhere and love their jobs?’

We wanted to deeply understand the problem, and then learn how they had tried to solve it in the past. And then not fixate on solutions — neither ours, nor theirs.

As it was too early to start asking leading questions, we proceeded with an open set:

And then, instead of targeting a single persona, we dared to learn from teams from day one. Whether it was a first-time manager who was struggling with impostor syndrome, owing to the unique challenges of remote leadership, or a new teammate who had difficulty fitting in, we gathered and put together multiple perspectives across different members of the team.

For instance, one of the teams we interviewed had two offices; one is Oslo and the other in Stockholm. And they really wanted to create a culture of togetherness.

We asked them, what were the measures they had taken to accomplish that goal? One of the measures was that they had actually set up cameras live streaming both offices at all times.

How did that go, we asked? They said: ‘It was awful, people hated it, they stopped going to that coffee machine where the camera was because they felt like they were being watched all the time. People did not like that. But we had good intentions.’

As you’re interviewing you have to pick those intentions and hunches and distill them to their essences. In the above case, they were seeking a sense of collective presence but not at the expense of being under surveillance.

Combining such challenges and intentions that our interviewees had witnessed with mental health and loneliness data among remote workers, the numerous hours of recruitment interviews in the back of my head as well as the terrible feeling I had had as an extrovert, remote office worker showed that there was — despite all the freedom and flexibility that people loved about remote work — something (human) missing in the virtual collaboration space.

What the MVP taught us about target-audience fit

As we were trying to get people to embrace a new behavior with this product, we knew the MVP feedback cycle had to be as hyper-intense as when we were validating our initial hypothesis.

Then, of course, we couldn’t build everything at once. So we had to safeguard the feelings we were hoping to create with just a basic set of features.

We rolled out the MVP with 4-5 testing teams.

We planned on doing qualitative user interviews over the following weeks. We even moved into a customer’s physical office to watch them interact, struggle, and use the platform. Documenting every single request, problem, and wish for our backlog. 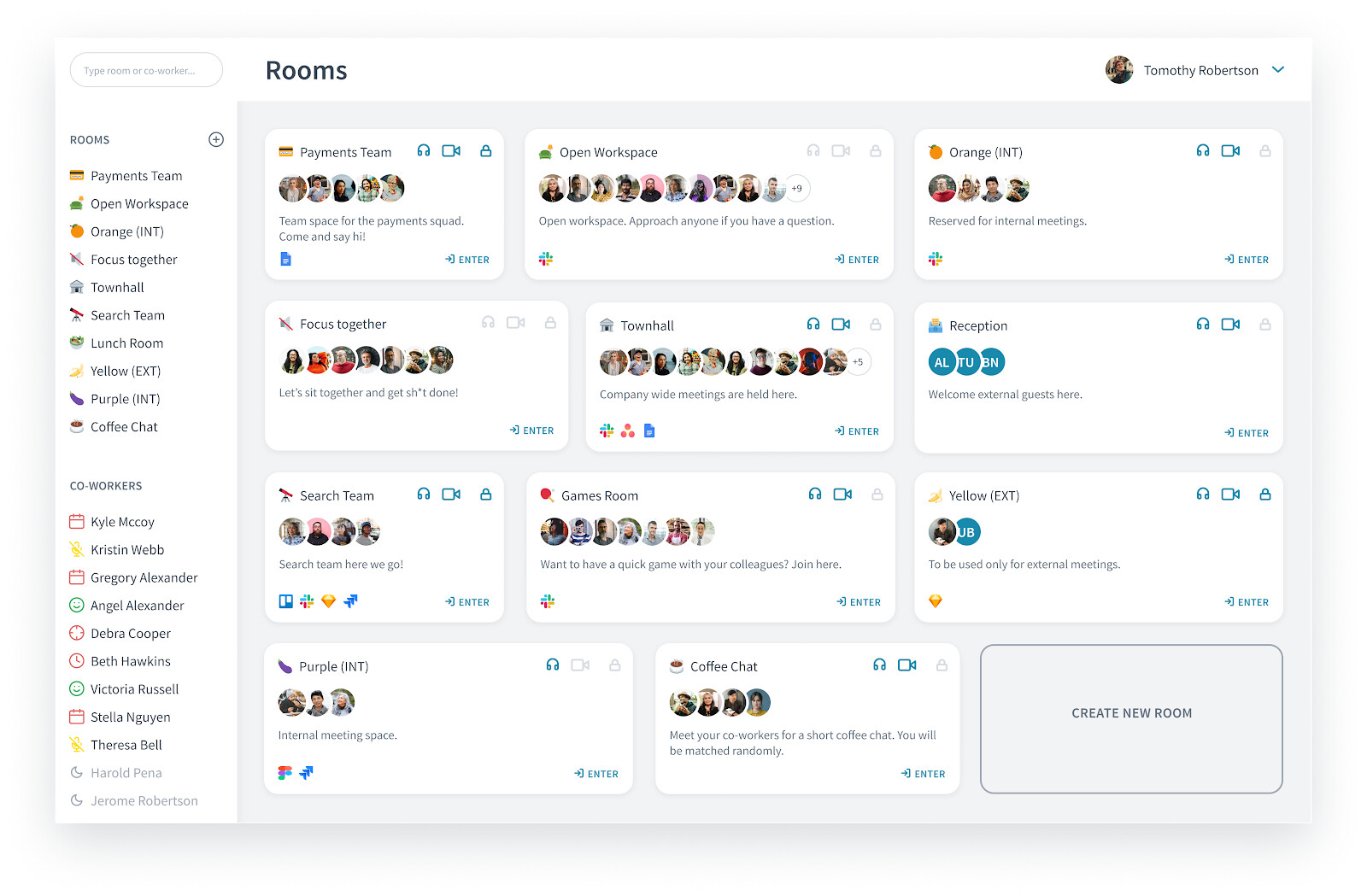 Constantly attempting to answer: Did they understand the basic functionality? Were they assuming a different behavior than we had anticipated? Did the coffee button mean heading for a break or did it mean talking to someone on the team?

And like any other MVP, it was not supposed to fly, exactly.

So it did fail for some users. And each of those non-fit episodes taught us a lot about the contexts we had to build for, extremely early.

I still remember some of these. One was a project group at a university. They had been very active early users. But as soon as their project was shipped, they simply stopped. Because they stopped being a team with a common goal.

Then this other team, which was a team on paper, going by their org structure. And just didn’t see much in the MVP. Because they didn’t need each other to get their tasks done.

And then a small team of five that just didn’t have enough people for any kind of virtual social interactions to take hold.

So these brought in some important corrections in our target-audience fit.

Learning deliberately, one day at a time. Even if everyone is beating down the door!

Little did we know that just three weeks in, we would be interrupted by a global pandemic.

Some people joke and say, ‘oh, you got lucky because of the sudden need for something you had already been building.’ To be clear, it has been amazing. But of course for us it would have been even more amazing if the product had been more market-ready sooner.

On the other hand, this unexpected demand also risked distorting our product-market fit trials. As all of a sudden, the entire world became our target audience. I know it’s a luxurious problem to have. But it was really easy for us to get derailed from our focus on the audience we had validated our hypothesis with.

We were receiving requests from everywhere. Some people with no experience of beta programmes, those unfamiliar with the inherent work-in-progress nature of MVPs, and overall, very different expectations than we had witnessed during our research.

And we kept a cool head and kept revisiting our initial hypothesis and also the people who had found it most resonant for their challenges.

So we had to cluster different segments and work through the requests, a step at a time, no matter how horizontal the product’s appeal might have been.

And then analyze, week by week — who was sticking around, who was churning, how differently were the offices designed, org structures, behaviors, and personality types — and feed all that data into our understanding of product-market fit.

To sum everything up, our initial audience was a good pick. But we have also found secondary audiences which we’re still simultaneously researching and learning from.

I interview users every single week and I’ve spoken to at least 400 people since we began. I think this is one of my core responsibilities as a CEO, aside from building a strong team, and of course, talking to investors.

— Geckoboard’s co-founder, Paul Joyce, on the opportunity costs of building for everyone
— Crossbeam’s co-founder, Bob Moore, on the trade-offs of going narrow vs. broad

2 Likes
The Why Behind 78 Pre-Product User Interviews, The Difference Between Pitching and Research, and Why MVPs Don’t Work Anymore with Cord’s Co-Founder, Nimrod Priell
SaaS Founders at Work '22 Edition: 42 Inspiring Heuristics and Hunches from 194 Years of Building
rajaraman (Rajaraman Santhanam) March 15, 2022, 5:47am 2

Thanks for doing this, @TeemycoCharlotte!

Now that Teemyco has grown into a bigger team, how is the work of talking to customers embedded across different functions? In other words, what sort of processes have helped you scale this active learning practice from founders to everyone else?

Thanks for the great question! In february alone, we did 10 deep user interviews. Now that the company is 20 people big, it’s different people hosting them; e.g. customer support, cpo, customer success or ux design. We take notes or record them to share internally. We show secret things coming up in the pipeline and get feedback from users before we start coding. Hope this helps