Aiming for a "Won-and-Done" Category, Acquiring a Newsletter before Making the Product Public, and The Merits of Being Async-First with Loops’ Co-Founder, Chris Frantz

The (perceived) natural order of things in older SaaS categories is often one of stasis. Conveying that the big winners were enthroned at least a decade ago. That the new entrants can only ever locate limited gains sheltered under niches and segments.

There are hundreds of products in the email space.

That’s true. But then there’s no real, clear winner.

The only company that most people can point to as a leader is Mailchimp.

You’ll find remarkably low NPS scores across the category. Nobody actually likes the tool they’re using. And as it’s also difficult to quit or migrate from these, a customer sticks with terrible solutions and pays through their nose for way too long.

Many of our competitors have been around for at least a decade. Their founders are off doing different things today. So most of them are late-stage orgs operating in the “let’s build another vertical” mode. They’re just not aimed at improving the core of their business.

We think it’s important to improve the core.

That’s why we’re building a product that is hopefully, fundamentally delightful to use.

Because delight just doesn’t exist in this space. I don’t even know if users in this are familiar with that term. Consider this: There’s no Notion of this space yet. There’s no Linear. There’s no Figma. We want to own that mantle.

Right now, we’re laser-focussed on early-stage B2B SaaS. Although we do have sign-ups from other segments: Newsletters, Ecommerce businesses, and more; we’re not onboarding them yet while we focus on our ideal customer profile.

The plan is to gradually solve for B2B SaaS and then eventually branch out of SaaS. But no matter the segments, we’ll continue to have a strong early-stage focus.

We believe that’s exactly where a lot of email providers fail. As they try to mature and move into mid-market they de-prioritize and heavily gate their freemium offerings. They build sales teams and lean increasingly more towards large clients who’d commit to long-term contracts instead of building to solve the problems of the next generation of companies.

The critical mistake they make is forgetting about the small companies that start with their products and grow into those larger mid-market and enterprise companies over the next few years.

And because they’ve forgotten about those early-stage sign-ups, we get to work with all those companies and compete from the bottom up.

Running ads to acquire a newsletter, not users

Most Loops customers come in through referrals. We’re fairly early so there’s no built-in referral system. It’s just people using the product and manually recommending it to others.

The only form of paid advertising we’ve done is with newsletter ads. And that too wasn’t really about acquiring new users but for sussing out a potential acquisition instead.

You’ve probably seen the trend. HubSpot purchased The Hustle. Spotify brought in Joe Rogan. There are lots of these deals taking place and they make a ton of sense. But most companies are making these media investments at the top of the cycle.

We wanted to flip that by making an early bet, at a rate that we could afford, and really grow it along with the person running it.

How did we find our opportunity?

We purchased sponsored spots in 5 different newsletters over a period of a couple of weeks. We compared the results and found that Workspaces (a newsletter that curates and highlights creative workspaces each week) was right at the top.

I know it doesn’t seem like a match at first. But we discovered that a readers seeking inspiration for their home offices were also running/setting up early-stage businesses and that made them a perfect fit for Loops.

In fact, we broke even on our ad almost immediately.

Then the subscriber base also had an overlap with those who could potentially work with us in the future given our async-first ethos so it ended up being a great recruitment engine for talented engineers. We’ve had a number of engineers apply directly to Loops and cite reading the newsletter as how they found us.

Most importantly, this was an awesome acqui-hire for us. We brought on Ryan (who started and grew the newsletter) full-time, as our Head of Content.

Since we’ve made this purchase, the newsletter count has doubled. So the implicit, inherent value of the business is already 2x of what it was at the moment of the sale.

We generate new customers every single week because of this acquisition.

Everyone told us not to do it.

Lol, that’s why we knew we had to do it. We closed the deal within a week and a half.

I must say though that it worked out great because the audience was a great fit for us, Ryan was an exceptional hire to make, and we realized the value pretty quickly. It’s hard to replicate.

The problem with doing PLG in the email category is that when you have a generous free plan, people are going to abuse it and blast out crypto scams.

PLG fits into a product like Linear easily. Worst case scenario is someone creating too many tickets in their engineering system.

With Loops, people can make fifty accounts. Send thousands of emails through each. And fifty thousand spam emails later, we’re a scourge of the Internet. That’s a real problem we don’t want to have.

Most companies survive this through something I like to call: security through obscurity. That is they don’t get too popular and as a result fewer problematic users ever encounter the product. We’re thinking through that and figuring how that doesn’t become a problem for us because we don’t want to be obscure!

The goal should be to both encourage virality while limiting the damaging factors growth in this space can inflict simultaneously.

“…he would prefer working for us over a FAANG company”

You want async to be the foundation for your business before you sign office leases because it becomes a lot harder to justify async and remote work if you have a multi-year long real estate commitments.

Plus, if you do this early, setting an async foundation and being public about it — we publish our “how we work” docs on our site that describe exactly how we operate — you can attract potential hires who are more likely to be aligned with that particular way of working.

Recently, we had an Apple engineer apply because Apple is dragging everyone back to the office. He likes remote, he likes what we’re building and how we operate, and he would prefer working for us over a FAANG company based mostly on those values we hold.

Being 9 months into the journey, making that kind of impact with our hiring process is definitely encouraging.

It shows that there’s certainly a bit of interest from folks that have had established careers. Those who require flexible hours and an ability to put in focussed time whenever it suits them best during the day.

That’s why you’d notice that the first section on our “How we work” page is about how we work as a team. Because that’s the most important part. That’s how you do all of your work. 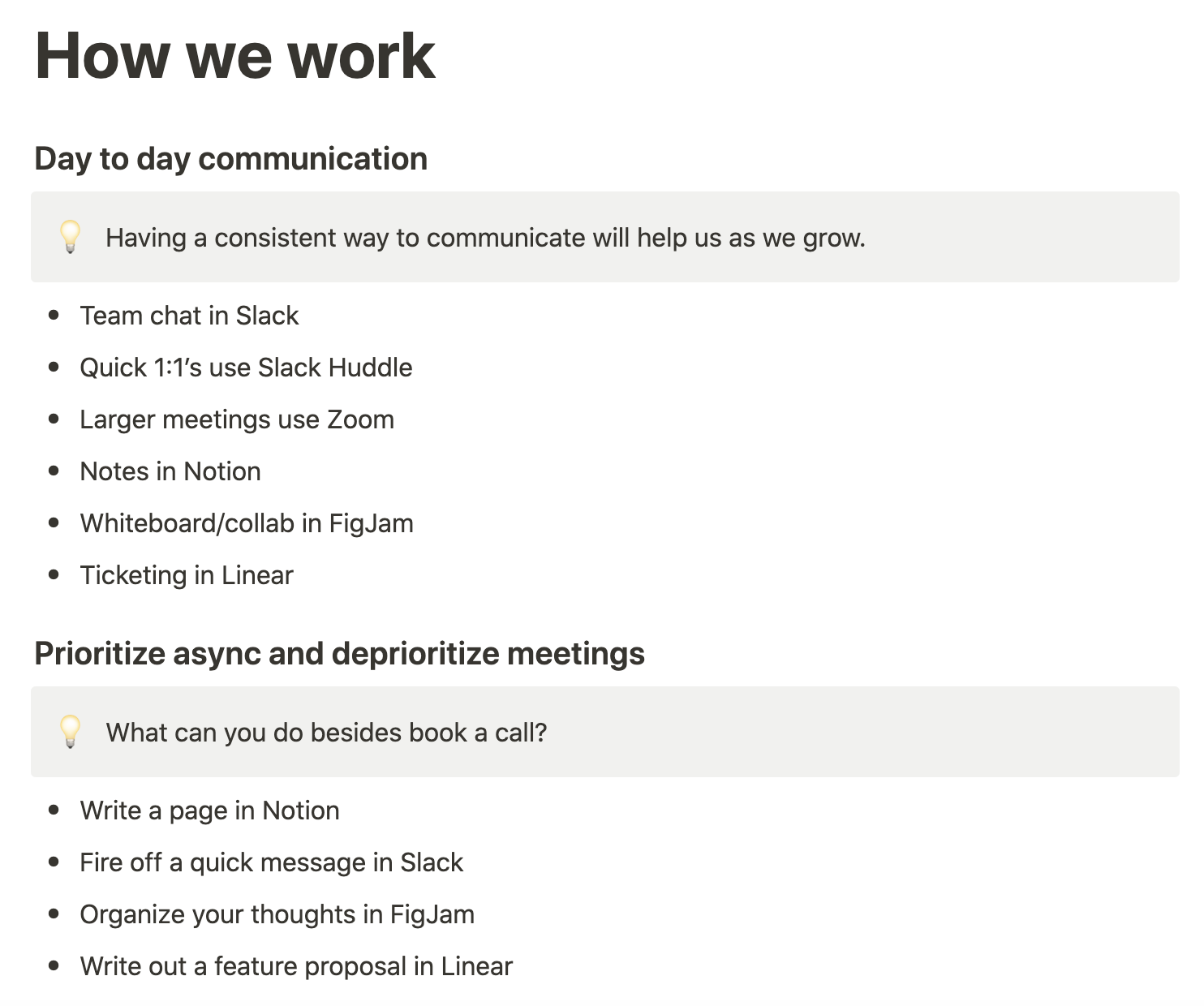 You don’t get to use a different stack. There’s no trying out new tools. Everything in here is labeled for the same exact async system, for everyone.

Some of these tools feel purpose-built for this method of working. For example, Linear automatically archives tickets after six months and sends you a notification.

Slack’s 1-1 huddles encourage ephemeral, quick chats. Zoom signals a place for longer meetings every once in a while. Having all our notes in Notion means anyone can find anything info they need with a single universal search. That also means: No notes inside of Slack. Nothing in Microsoft Word. No presentations. No Google docs.

Functioning with such specific frameworks will be difficult for larger teams. As they end up using a variety of different tools for similar tasks. So it does help to lay the foundation.

This doc, hopefully, is going to be the central operating OS that we have for the next decade. We’ll continue to update it and have a single tool for a single purpose. That’s how we can work async and be successful.

It’s really simple once you have the communication frameworks in place at an organization level.

— Pulley’s co-founder, Yin Wu, on not building for an obviously large market
— Butter’s co-founder, Jakob Knutzen, on taking on Zoom by targeting a beachhead market

Hey all! Here and happy to answer any questions you may have

Thanks for sharing how you’re approaching the early days at Loops in such novel ways, @ChrisFrantz. I’ve long believed how most competitive SaaS markets are far from winner-take-all plays they can often seem, but you’ve raised an excellent point here, that some of them don’t even have clear winners yet.

You’ve emphasized “opinionated design” as a differentiator on the Loops site, it’ll be great to hear you unpack that and understand where that sits with being customer-driven, and how that turns into a competitive advantage.